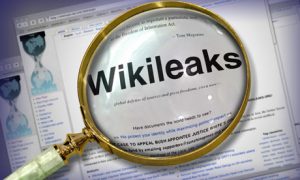 Recently we’ve all been inundated with information about Wikileaks, the website owned by Australian Julian Assange. Assange got confidential US government information and posted it on his website creating incredible diplomatic pain for the US government and other governments around the world.

He posted information on the US war in Iraq and now diplomatic wires between the US and various governments around the world world.  Assange says he is promoting transparency and openness for governments by posting this information.  Unfortunately, the US government employee who gave him the information was treated as a traitor (and rightfully so) and is now in prison.

So what are we all to think of Wikileaks and this individual Mr. Assange?

” In 1973, I went to prison for leaking government documents – in that case, an FBI file on Daniel Ellsberg, the man who himself leaked the  Pentagon Papers to the New York Times.”

“Like today’s leakers and those who have published the leak materials, I thought that my actions were justified by a higher, more important, purpose. The release of the Pentagon papers put lives at issue. So I thought I had to stop Ellsberg. Classical ethical dilemma. My actions in pursuit of a noble goal were wrong-and in the end hampered the government’s ability to prosecute Ellsberg.”

What are we to think of Wikileaks?  The answer for this political trouble is probably the same answer you would give as a business professional.

With the internet today, it is important that we carefully consider what we do. What we do can endanger or even hurt others.  Just because you have information does not mean that it needs to be published.  There are probably many business people who would be tempted to publish a list of their customers that didn’t pay their bills or ripped them off.  Not a good idea.  Once it is published, the damage as done.

What can we learn from Wikileaks? Sometimes it is better to leave things alone.  One American is in prison for giving Assange the information he published.

As for openness and transparency, experts tend to agree that this breech of trust will likely cause more concern and less openness and more secrecy as governments move to better protect themselves.  We shall all soon see.