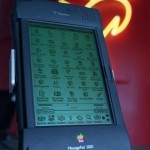 updated 8:13 p.m. ET March 26, 2010
Apple’s iPad, a touch-screen computer that falls between a laptop and a smartphone, is almost here, due to go on sale April 3. But contrary to Cupertino mythology, the iPad didn’t sprout from Steve Jobs’ forehead fully formed. There were a number of critical events stretching back nearly 40 years that helped pave a path for the iPad:

ARPANet
Before there was Facebook, Twitter or the Internet in general, there was ARPANet, a U.S. Defense Advanced Research Projects Agency (DARPA) project initially conceived as a way to allow academic and military computers to communicate with one another.

ARPANet was the first computer network to employ a technology called “packet switching,” which the Internet uses today. Packet switching allows a message to be broken up into data chunks and sent through multiple routes to another computer. Once all the chunks arrive at their destination, they are reassembled into the original message.

The first ARPANet message was sent on Oct. 29, 1969 from a computer in Los Angeles to one at the Stanford Research Institute in northern California.

GUI
Apple’s introduction of the Macintosh in 1984 with its graphical user interface (GUI) puts a human face on computing.

Laptops
Computers users bridled at being tethered to the office. They were finally able to escape their bonds and get off the grid inbetween charges in 1989 when both Apple and Compaq introduced battery-powered notebook computers within a month of each other.

Mobile chips
Any device that lives on batteries is at the mercy of its appetite for power. Its processor has the heartiest appetite. And as mobile computing devices get smaller and smaller, there’s less room for batteries to satisfy that appetite. The solution for matching supply and demand is to develop processor chips that require less juice.

Beginning in the 1990s, ARM, then known as Advanced RISC Machines, created a new generation of power-parsimonious chips. Intel introduced its own low-power chip architecture with the Atom chipset in 2008 and Qualcomm launched its ARM-based Snapdragon in 2009. The iPad will use Apple’s own custom CPU that incorporates ARM-based technology.

Newton/PDAs
Apple has always stubbornly sought to “think different,” but it decided to think small when it launched its first handheld device, the Newton MessagePad, in 1993. The Newton created a new category of device — the Personal Digital Assistant (PDA).

The touch-screen device had an address book, calendar and an e-mail function. It also carried a $700 price tag and flopped.

Palm took the same idea and hung a $300 price tag on its Palm Pilot, which it introduced in 1996. Palm saw sales — and the entire PDA market — soar.

Smartphones
What would happen if you combined a cell phone with a PDA? That’s what IBM did in 1992 with its Simon smartphone concept. Cell phone manufacturer Nokia brought that concept to life with its Nokia 9000 in 1996.

Tablets
Tablet computers started out as pen-based computing slabs without a keyboard. Users loved the form factor but balked at using a stylus as their interface with the computer

The GRiDPad, introduced in 1989, was the first commercially available tablet-style portable. Tablets never really caught on. The convertible laptop is a more popular hybrid that functions either as a conventional laptop with keyboard or as a pen-based computer in tablet mode.

iTunes
Downloading files and software has been with us a long time. But when Apple launched its iTunes store in 2003, it revolutionized how people get and consume digital information, entertainment and applications.

iTunes was also a major factor in the success of Apple’s portable music player, the iPod. Working together as a single “ecosystem,” iTunes and iPods created a seamless software and hardware solution for gathering music and playing it on the go.

Cloud computing
Cloud computing is a lot like the old client-server mainframe world. Computing power and storage are consolidated on powerful servers that are accessed through dedicated lines or over the Internet.

The cloud became much more visible in 2002 when Amazon began offering Amazon Web Services, a collection of remote computing services that could be accessed over the Internet. Devices such as netbooks, smartphones and the iPad don’t have removable storage drives. For them, the cloud is the most convenient way to get information in or out of their devices.

iPhone
Apple practices convergence with a vengeance in 2007 when it introduced the iPhone. It instantly became an object of desire for millions and introduced users to multi-touch touch-screen control.

Netbooks
Taiwanese computer manufacturer Asus created a new form-factor category, the netbook, when it introduced the Eee PC 700 in 2007. The best way to think of a netbook is as a lightweight, smaller-screen version of a laptop, which has a long battery life but no removable storage drive. Like the iPad, it lives and breathes though the cloud.

E-book readers
Amazon scored a major hit in 2007 with its Kindle, a dedicated e-book reader with 3G cellular connectivity that let users download books from Amazon’s vast inventory of books in seconds. Competitors such as Barnes & Noble’s Nook soon joined the party, staking out a new arena for digital consumption — books.

Apple swears iPad partners to secrecy
iPad may beat iPhone’s first three-month sales
Apple’s iPad is one of a slate of slates
The iPad
The iPad is a combination of all of the above, fitting into the space between smartphones and laptops but without the phone.

True believers are convinced it will do for mobile devices what opposable thumbs have done for humans.